I’ve just had a rare visit to London, and one of my treats was a classical music concert in St Martin in the Fields, the beautiful old church on Trafalgar Square. Right across the road, in the big central area, was a vigil and protest for Ukraine, which is happening nightly.

It was moving to see and join in this collective expression of outrage, grief, and demands for further action. Their leaflet has a picture of people sheltering in a subway station in London in 1942, and Kyiv in 2022. It’s awful, and I’m sure most of us thought those times were behind us. 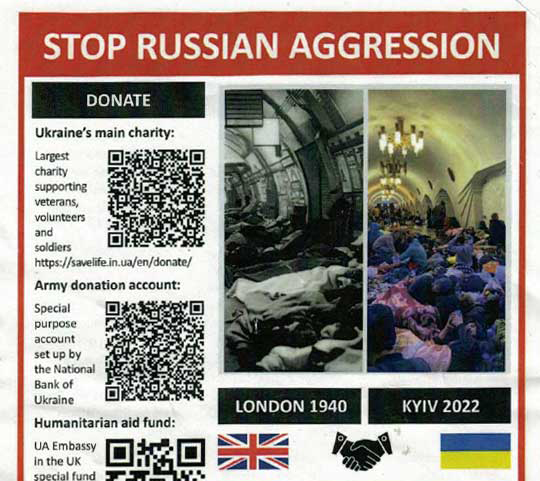 The concert had added power and poignancy because of the crisis, and the vigil across the road. I recall that composers like Beethoven and Mozart were often writing in times of war. Their music lifts the soul by bringing joy and pain together into one whole, which is the mind-blowing nature of our reality now.

One thing which has struck me about the Ukraine crisis is that it’s visible, and present with us: we may be struggling with our feelings, but we’re talking with each other about it. Ukraine was named and acknowledged in the concert; many shops were raising funds; on Match of the Day, many football fans were wearing blue and yellow. There’s a sense of shared humanity across borders. One of my hopes is that all of this spreads to the climate crisis too, which needs the same kind of mass engagement.

After the concert, my daughter and I walked through Covent Garden. There was a street musician, with a crowd of adults, teens and kids. It felt like the Ukraine crisis has re-evoked the spirit of the Blitz, a desire to enjoy this moment as we can, because we don’t know what’s ahead. Strangers were dancing with each other, and all of us sang along to his last song, Stand By Me, with deep feeling.

For my blog, Navigation aids for a world beyond normal, click this link.