Donald Trump and the Second Coming

This guest blog was written by Maria Trap, and is reproduced with her permission.It seems a suitable Christmas blog, though the plan’s not quite working as hoped…

After more than 2000 years since the birth of his son God felt that it was more than time to stage the second coming. He felt it was actually getting a bit late. Mankind was screwing up pretty bad. But, who was going to pay attention in a world full of social media, plentiful news sources, a whole range of organized religions as well as more loosely defined spiritual practices and teachers. Who would pay attention if his son would come back and add his message to the whole variety of truths that was being presented? 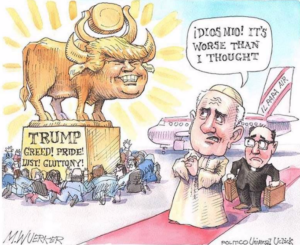 God thought about it, observed what was going on on Earth, saw what could potentially happen with the American elections and came up with this brilliant idea: Instead of sending Jesus again, he decided to bet on a candidate for the presidency. Donald Trump, with his emphasis on me-me-first, money, more money, his tendency to lie, cheat and always blame someone else, his addiction to surround himself with beautiful women and shiny (preferably golden) things AND his ability to get EVERYONE’S attention, was the perfect man for the assignment.

The scenario was this: Donald would be put into the most powerful office on earth by enough people who would see him as the saviour of their country. The vast majority of people around the world would see him not just as a deplorable person and a bad example for their children, but also as a destroyer of good and civilized things, a great danger for the world’s future and an ignitor of hate rather than love. Many, many people would feel confronted and wake up to the fact that they would have to reach inside themselves to touch their core values, their love and compassion and bring these into the world. That they would have to stand strong. That they would have to work together with others who were trying to do the same thing in their own way. That they could not take anything for granted anymore….

“Perfect”, God said, “Trump will get our part of the job done. You don’t have to go there anymore, Jesus. Let’s just go to the table, enjoy our Christmas dinner and see how things unfold.”