Of all the front-line services we depend on, hospitals are among the most crucial, and a large hospital will have several hundred junior doctors. These are young men and women, from mid-twenties into thirties. They start right out of university, and the first two years are the Foundation phase. An amazing 30% of junior doctors drop out of their career during these two years, which is a huge loss of talent and money.

I recently co-led a natural resilience workshop for Foundation Level junior doctors from a large London hospital, at Hazel Hill Wood. It was intense, demanding, and there was a lot of learning and fun for all of us.

In my twenty plus years of leading workshops, I’ve not worked with this client group, or one like it. The vibe was how I’d imagine Spitfire pilots in World War Two: so young, so few, so bright, living constantly with life or death, and depended on by huge numbers of other people.

We had planned a sort of alchemical process which proved broadly correct. We guessed that they would arrive very tired and stressed, and that getting them physically active in this beautiful wood was the best way to de-stress quickly.

Early on, we did a half hour of mindful walking and movement/breath exercises. Soon after, we did an hour of conservation work, and its effects were greater than we expected. It provided surprisingly soothing for them to have a really simple physical task, whose ecological benefits they could readily understand. And deep conversations soon started as people worked together in small groups.

The next activity wasn’t planned – it was requested by the doctors: playing hide and seek. I realised that physical games were a brilliantly functional way for them to de-stress quickly.

Insights at the campfire

A key part of the plan was a campfire after supper, and a chance to share and reflect on their stress and resilience. They plunged in deeply, and it was an illuminating conversation for all of us. To do this work, you need to be extremely bright and passionately committed, but the kind of daily challenges these doctors face need different talents. Here are some of their comments:

“Staff teams change all the time – you don’t really know the people you’re working with, and I rarely feel recognised or appreciated.”

“I was involved in a serious incident, where something went badly wrong. There’s a rigorous enquiry process, but no one ever asked how I felt, or offered me support.”

“You are at the mercy of the consultants – they can easily bully you, and there’s no redress.”

“I’d rather work anti-social hours, and in a very stressful department like A&E, if I feel appreciated by the consultant and I have some real responsibility.”

After this deep sharing, the wine came out, and there was plenty of laughter as the conversation lightened. The work hard-play hard theme continued.

On the following morning, we provided some more specific techniques to help them raise resilience in their daily work: the aim was to provide 5-minute processes they could do in the heat of the moment. We worked with three of the principles in my Seven Seeds of Natural Happiness model:

We also did a constellations exercise, which made no rational sense beforehand, but provided a lot of insights. It’s a way of getting to intuitive and subconscious insights. Here are two comments:

“We’re dealing with huge amounts of on-screen data, both at work and in our personal lives. We need to slow down so we can have meaningful contact with people”

“Doctors are expected to show certainty for patients – we need to find better ways to handle uncertainty.”

These young doctors were very articulate about the systemic problems that make their work and the whole NHS more depleting than it need to be. They were not cynical or despairing, but very frustrated. As one said, “the junior doctors’ pay dispute erased goodwill.” When I asked what else a highly-trained junior doctor could do, one explained that they were highly sought after in consultancy and business. They clearly have a huge capacity for handling complexity, stress and long hours. 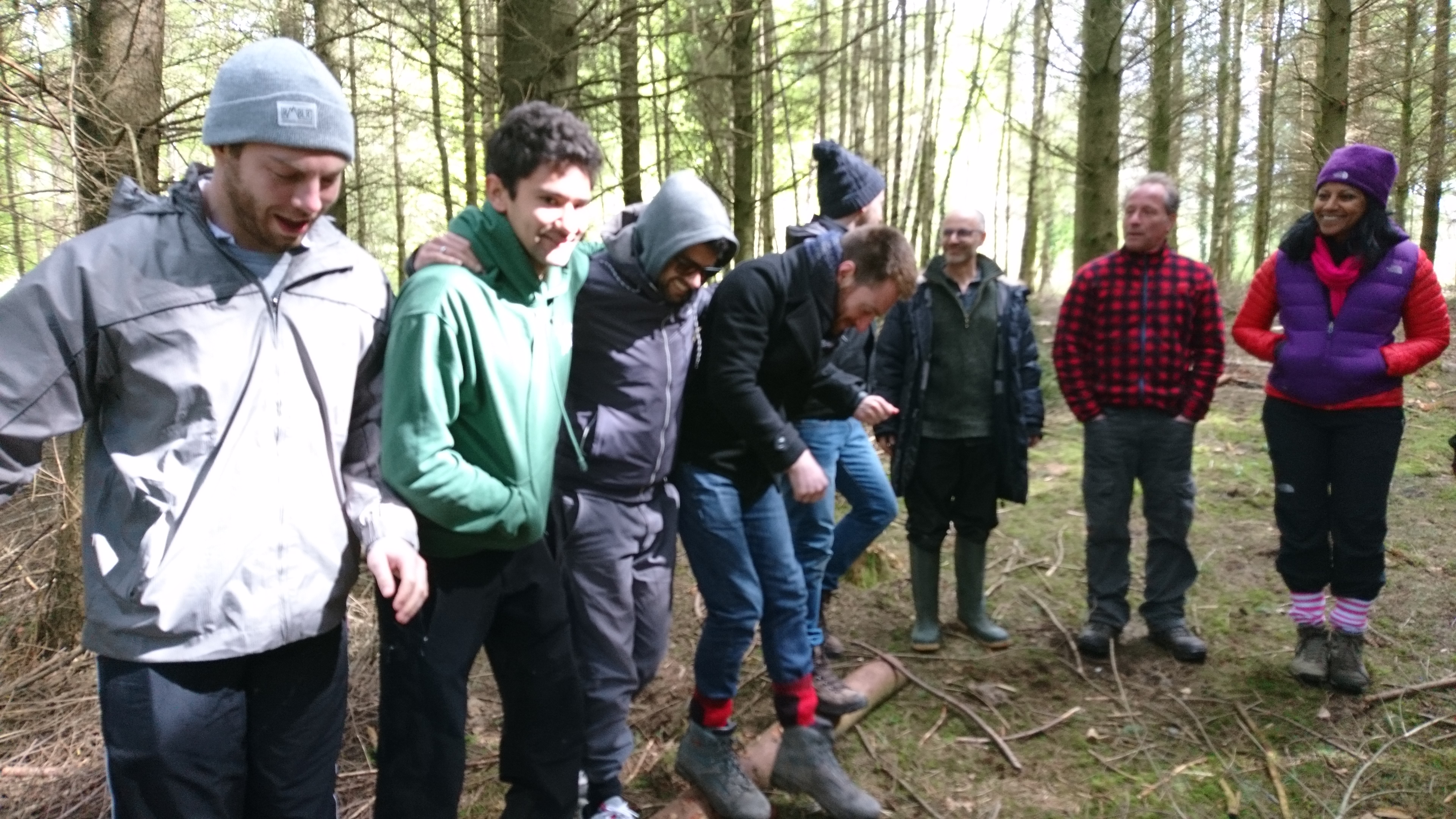 Three wishes for the NHS

To describe all the issues we discussed would double the length of this blog. Instead, here are my three wishes for the NHS:

One of the pervasive problems of the NHS is what I’d call desiccation: you could also call it tickbox mentality, or one-dimensionality. With such a huge and crucial entity as the NHS, the pressure towards gesture politics and superficial responses is enormous. For example, the junior doctors are required to undertake a ‘quality improvement’ project, but as they explained, they have no meaningful time or support to do this. Other examples abound: politicians and managers can say, oh yes, we’re attending to this, but it has no real substance.

Overall, it was incredibly satisfying to see that the combination of this magical wood and the processes we offered had enabled these doctors to renew, reflect, and learn some new approaches to resilience.

Given the daily pressures they face, it’s valid to speculate how much of this benefit will be sustained. We agreed various follow-up and support steps, including a half-day session at the hospital in a few weeks’ time. There’s a very detailed evaluation process, including at the start and end of the workshop, plus 1 and 3 months after it. The feedback so far is outstandingly positive, and there were significant reductions in negative feelings like tension and confusion, and comments that they had learned to be kinder to themselves.

The doctors themselves had some specific goals in our closing round:

“I’m going to use the Headspace App to do some mindfulness every day.”

“I want to leave behind in this fire the idea that showing emotion makes me weak.”

“The idea of creating an upward spiral in the team I work with by showing them appreciation is really exciting and doable.”

This was the first of three pilot events which will hopefully lead to longer programmes with more sustained support. It’s extraordinary that most junior doctors go straight from medical school to duty on the wards, with no meaningful induction or training in resilience and self-care. No wonder there’s 30% dropout.

I learned a huge amount myself about why this work is so stressful – many of the reasons being systemic, such as funding cuts, rising patient demand, risk of litigation, and frequent top-down initiatives. I am left in awe of the resilience these young doctors have to find to get by every day, never mind bouncing back and renewing their motivation.