“It rests on kindly people to save the world”

We look a little too closely at the pandemic to see clearly what’s going on: what the long-term future will reveal is that in 2020 we crossed a tipping point – though really this tilting of history started perhaps in 2008-12. Or perhaps around 1965-70. It concerns the scaling down of an overinflated economy running on coffee, cocaine, excess and shady dealings, the power of people to have agency and influence in that economy, the hearts and minds of publics worldwide, the willingness of society to go through changes we know to be urgent and necessary, and the relationship between the world’s ecosystems and human behaviour. Big questions – quite bottomless societal, environmental and psycho-spiritual questions. We’ve gone too far, something fundamental needs to change.

This isn’t really a question of politics or ideology any more. The word crisis comes from ancient Greek. It means a situation prompting us to distinguish, choose and decide. We spend a lot of our lives engaging in avoidance strategies, and of course crises are uncomfortable, threatening, often painful and cruelly indiscriminate. They present truth and facts, whether or not we like it – there’s no stopping an earthquake, hurricane or an advancing army. But a crisis is also an opportunity, an integral part of the pattern of change. There can be new possibilities available, and sometimes they work, sometimes they don’t. Sometimes you get a tragedy, sometimes a miracle. For better or worse, crises tend to force and resolve multiple issues at the same time. Crunch, bang, that’s it.

In our day, simulated realities seem to be replacing manifest reality: belief seems to be overriding what’s standing in front of us. This isn’t new in human history, but the scale of it is new. There are more souls alive today than ever before, experiencing that simulation and, unfortunately, believing that it’s reality. Philosopher Teilhard de Chardin invented the idea of the noosphere (pronounced no-osphere), the constructed world of human belief – what we think is going on. Human history has been one long story of the development of an ascendant cultural consensus, the noosphere. It has replicated to a point where, in our globalised, urban-industrial-digital society, it shouts louder than the ecosphere, especially to city-dwellers, who also tend to make the decisions on everyone’s behalf.

Nowadays, if the ecospheric world impacts on the noospheric world, we dynamite and bulldoze it, setting scientists, doctors, engineers and politicians on it to chase it away. But the noosphere increasingly resembles a house of cards, resting on shaky dependencies and rising so high that its foundations have cracked, and the ecosphere is impinging on us anyway. Yet within our own sphere of reality, each of us has our problems. Some are really dire (think of many Syrians or Yemenis, or of people keeling over with Covid in Brazil) while many people are confronting ‘grindstone mentality’, the uncomfortable feeling that we’re not doing enough to solve our problems and we must do more, setting aside our main priorities to do so – yet again. Then we worry about our ‘mental health’ when many of us, and society as a whole, are having a spiritual crisis. WTF are we here for, and is this the world we really want? 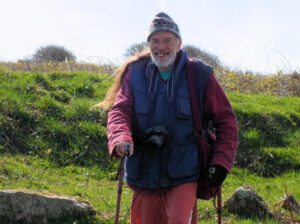 Palden near his home in Cornwall

It rests on kindly people to save the world: this has been demonstrated during the Covid crisis. It has been a case of ‘amateurs built the Ark and professionals built the Titanic’. Society has leaned heavily on dedicated people who have an altruistic bent and the skills of service. It has leaned especially on non-professionals acting out of goodwill, service and commitment – in the rich world, social care and healthcare have been over-professionalised, while family and community support systems have been asphyxiated by ‘progress’ and the busyness of a demanding modern life. Though some professionals have done a heroic job too: I’ve seen this with the doctors and nurses I’ve met in my cancer treatment.

By healing we become healed. By giving what we can, even when we have limited possibilities, we do receive. It is possible for a whole economy to work like this – and I’ve seen such principles at work in Palestine, where officially there is high unemployment and a lot of destitution, yet everyone is busy and more or less catered for, even living under longterm military occupation. Sometimes, when we need help, the best thing to do is to help someone else. Help the world.

One awkward question we need to face in the coming time concerns social roles and their tendency to get fixed: whether we’re a net helper or a net recipient, male or female, black or white, progressive or resister, we mustn’t get too attached to any positions in the spectrum. Because help and support flow around society in the most miraculous and amazing of ways. If we permit it. For this to work, everyone, no matter how helpless or seemingly useless, has something to give and we need to give it. Withholding our humanity and creativity holds the world back.