Discerning at the end of life

Alan Heeks writes: Palden is an old friend, who plays a Merlin-like role in my life, popping up periodically with cryptic insights. He’s a deep thinker out of the box, a seer and astrologer, who usually offers a radically different point of view. 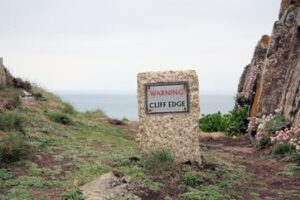 Something is beginning to come together, and that’s a relief. I went through a big loss and crisis nearly three months ago, with my world disintegrating and hope plummeting, but I plugged on through it, taking it day by day. A blessing arose in that darkness that I didn’t see at the time. As my health and spirits sank it felt as if I was coming close to dying. As I mentioned in my last blog, we’re all partially dead, and at that time I went from (perhaps) 50% to (perhaps) 80% and started feeling pre-death shutting-down feelings. (Today I’m back around 50% again.)

There comes a point where you have to accept that you could be going. However, what I find is that, when I reach that place, everything changes. I go further toward dying, or my homoeostatic, self-healing capacities kick in, and a revival of some kind follows. You might have experienced this yourself in a breakdown or overwhelming crisis with death-like characteristics, even if it was mainly a psychospiritual wrenching out of the past and a squaring with the present.

The great thing about dying or near-death is that it clarifies and simplifies a lot. You see things more as they actually are, not what we tell ourselves they are. You’re less caught up in life’s ins and outs and see more clearly the underlying threads, meanings, connections and inevitabilities of things. And life is what happens when you’re busy making other plans.

So the rather deep and murky experience I had in February seems to have started me on a new chapter of exploration. I’ve decided to probe the inner experiences leading toward disincarnation, to see what I can do about sensing or perhaps experiencing some of the post-death stages – at least as they might apply to me. It strikes me that, if I am willing and give it attention, it’s possible to disentangle many of the processes that occur around death, and to work with them in a different order or a different way.

I’m finding hints of this already. It has something to do with making good use of the end-of-life phase, when much of the stuff and processing that comes up around death can be done. This phase can last from days to years, and everyone’s story is different. I realised that, with issues currently emerging in my life, if I don’t process them now, I’ll need to do so at death. There’s a kind of quiet urgency to it. So from this came the idea of taking some of the pressure off the moment of death – removing some of the unnecessary confusion from it. 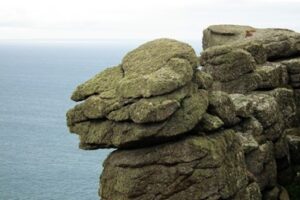 The ancient sage at Pordenack Point

But then, all of this might be the stuff of imagination. How and when we pop our clogs is not something that is controllable. It can happen to any of us tomorrow. Some of us have this truism facing us more hauntingly than others. We shall see how this all pans out when we get there. However, the experiences of the last few months, having shoved me through the grindstone, seem now to be yielding some fruits. And it’s springtime. And I’m still alive.

This end-of-life perspective has led to other things too. In my teens and twenties I chose a path of change, seeking, with so many yet so few others, to change the world. Well, it has taken a far longer and far more than I, or people like me, first thought. Even when being realistic, we still thought it would happen by the time of the Millennium. The purposes for which many of us were born have not been able fully to come about.

In my own case, I feel I was born not exactly to help bring about the big change in the world, but to lay tracks for what needs to happen after it. Much of my life purpose has been predicated on that, and I feel I haven’t done all that I might have done, though what I have done is good enough in the rather adverse circumstances of recent decades. With this in mind, I’m leaving quite a big archive of material on my website, just in case folks in my grandchildren’s generation, or even one or two of my own grandchildren, find it useful.

This issue, for me, has involved quite an internal struggle. And I’ve come to this…

Change takes seven generations. Several ancient cultures say this. That’s rather thought-provoking and difficult to face if you’re a change-making activist, but it’s true. Starting out in adult life as a revolutionary, this is what I’ve had to learn in order to make sense of the way my life and the world unfolded thereafter. Because it isn’t what I and we dreamt of. The world didn’t give peace a chance. However, there’s progress, even if, to us with our limited lifespans, it’s really slow. A lot of groundlaying has been done, and a lot of possibilities have been explored and trialled. Free energy is available, though it awaits its time.

If you count the enormous global change we’re a part of to have started moving in the 1960s, with my generation being the one that started shifting things, then our children’s generation, now mostly in their 30s and 40s, and their kids, now young or up to 25ish, make three generations. Those two younger generations have already shown signs of pushing the process further along than my generation could.

There are four generations to go. That takes us into the 22nd Century. If you come back once you’ve popped your clogs, you might perhaps see this completion in your next life or the one after that. Depending of course on how things go. We earthlings have, after all, chosen to go for a cliffhanger. Not even God Almighty knows what we humans are going to do next. It rests in our hands.

My feeling is that my grandchildren’s generation, the children of today, will shift things sufficiently to swing the overall tide of change in the world – especially in the so-called ‘developing’ or majority world, where young people currently form majorities. I sense that the crunch will come around the 2050s, when they are in mid-life and in power. (For more on this, see here.) That is, the world could well tilt from a net-damaging to a net-fixing mode around then, in de facto terms, but it will still take time.

In terms of long-term change, two things are going on here: one is long and slow, the stuff of centuries, and one is more intense, the stuff of decades. They’re confusingly intermixed. The long, slow one is all about becoming a planetary people, a sustainable and genuinely civilised global culture capable of taking its due place in the universe. That’ll take a while, since it involves healing the damage and trauma of millennia.

The shorter one is the crash-response period we must go through to stop the damage we’re causing and deal with its immediate effects, during this century and in the coming decades. This period of instability and change started in the 1960s and, after a delayed-action start, it’s beginning to gain momentum. Kind of. Hopefully. I think that, by the late 2020s, things could be moving much faster – we could actually be in for an avalanche of events and developments, for which Covid and Ukraine were but the foothills.

If we had started with necessary changes in the 1960s-70s, many of the problems we have now would be very different – we’d be further along the road toward sustainability, justice and peace, though it’s likely that we would not have progressed sufficiently to be ‘out of the woods’ by now. It takes time to fix planets and planetary races, and ultimately it has to be done at every level of reality and in all of the micro-worlds that make up this highly variegated planet we call Earth.

A planet is a mass experience with a particular flavour. Our planet has quite strong gravity-fields, and we therefore have to have quite robust bodies to handle it. Like some kinds of beings of other worlds, we can operate both in the physical and the metaphysical realms, except here, rather psychotically, we separate it into ‘waking life’ and ‘sleep and dreams’, while on other worlds the process is more integrated and conscious. Problem is that the intricacy and immersive quality of life here, together with the strong gravitational fields, pull our thoughts and beliefs downwards and we lose the plot, forgetting the real reasons why we came, the main agenda of life. We’ve made cultural institutions of this and we build our belief systems around quite alienated, separative, distrusting, competitive, threatened assumptions. That’s really weird.

This getting lost business is a big one. We all do it. It is a key part of the planet Earth process. The big question is whether we are able and willing to return to balance, to centre, to sanity, to proportion and to peace, when we do get lost. If we’re willing, the challenge is then to make a habit of returning – however we do that – so that it becomes an inbuilt, default pattern. This becomes important when we face death because marshalling all our forces at that time can be quite an operation. In death, you tend to go the way you habituated yourself to during life. Though it’s also important when we confront a moment of truth or a reality-crunch at any time of life: if habituated to centring and collecting ourselves, we resort to it as a default behaviour. This is important because, when we have a crisis, our control over things drops dramatically. So if you’re able to surf with it, drawing on experience, you’re more likely to make progress in life and in dying – and afterwards. You become psychospiritually more flexible.

So really, the way we deal with our crises and crunch-points in life sets the patterns for the way we die. If avoidance or denial are our default patterns, this makes for a more difficult death, since there can often be far more ‘stuff’ to deal with when death comes. So acceptance, non-resistance, becomes important. You can neither block nor push the river. Even if we feel we can’t handle it, it’s happening anyway, so acceptance is vital.

To see more blogs and podcasts from Palden, go to www.palden.co.uk.