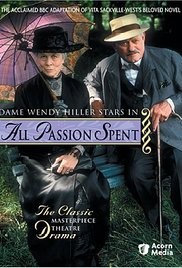 If Vita Sackville-West is known at all these days, it is as a landscape gardener, Bloomsbury bohemian, or as the role model for Virginia Woolf’s Orlando. In fact, she is a superb novelist too: perceptive, witty and elegant. The central figure of her novel All Passion Spent is an 88-year-old widow, whose last years prove a triumphant liberation from all the limits life had placed on her.

The story begins just after the death of Lady Slane’s husband, Lord Slane, a dry but distinguished figure, who in his time has been Viceroy of India and Prime Minister. Their children are mostly a ghastly crew, in their sixties, who assume that Mother will now live with each of them in return for rent.

To their amazement, Mother, who they see as an unworldly simpleton, takes a stand, and tells them she intends to move out to Hampstead. The children grudgingly offer to bring her grandchildren and great-grandchildren all the way to Hampstead to visit her, but she replies: “I am going to become completely self-indulgent. I am going to wallow in old age. No grandchildren. They are too young. Not one of them has reached 45. No great-grandchildren either; that would be worse. I want no strenuous young people… for it would only remind me of the terrible effort the poor creatures will have to make before they reach the end of their lives in safety. I prefer to forget about them. I want no one about me except those who are nearer to their death than to their birth.”

As the book unfolds, we come to realise that Lady Slane is an artist at heart, whose adult life has been completely dictated by her duties as a wife and mother. Now, at 88, she creates the life she wants, helped by some delightful elderly gentlemen, and by her wonderful French maid, Genoux, whose mangled mix of English and French is a total delight.

An important part of this golden phase is making sense of the past: “And what, precisely, had been herself, she wondered – an old woman looking back on the girl she once had been? This wondering was the softest, most wistful, of occupations; yet it was not melancholy; it was, rather, the last, supreme luxury; a luxury she had waited all her life to indulge. There was just time, in this reprieve before death, to indulge herself to the full. She had, after all, nothing else to do. For the first time in her life – no, for the first time since her marriage – she had nothing else to do. She could lie back against death and examine life.”

Part of this review is a deep pondering over the question of happiness, and what this really means. “Had she been happy? That was a strange clicking word to have coined – meaning something definite to the whole English-speaking race… But one was happy at one moment, unhappy two minutes later… So what did it mean?… It seemed merely as though someone were asking a question about someone that was not herself, clothing the question in a word that bore no relation to the shifting, elusive iridescent play of life; trying to do something impossible, in fact, like compressing the waters of a lake into a tight, hard ball. Life was that lake, though Lady Slane, sitting under the warm south wall amid the smell of the peaches; a lake offering its even surface to many reflections, gilded by the sun, silvered by the moon, darkened by a cloud, roughened by a ripple; but level always, a plane, keeping its bounds, not to be rolled up into a tight, hard ball, small enough to be held in the hand, which was what people were trying to do when they asked if one’s life had been happy or unhappy.”

The book evokes beautifully the state of old age, in ways that echo my own experience with the very old. For example, the interplay between past and present: “Lady Slane sat down on a bench and rested. Little boys were flying kites; they ran dragging the string across the turf, till like an ungainly bird the kite rose trailing its untidy tail across the sky. Lady Slane remembered other little boys flying kites in China. Her foreign memories and her English present played at chasse-croise often now in her mind, mingling and superimposing, making her wonder sometimes whether her memory were not becoming a little confused, so immediate and simultaneous did both impressions appear. Was she on a hillside near Pekin with Henry, a groom walking their horses up and down at a respectful distance; or was she alone, old, and dressed in black, resting on a bench on Hampstead Heath?”

The book also shows us the narrowing of focus, the physical discomforts of old age, in a positive light: “Her body had, in fact, become her companion, a constant resource and preoccupation; all the small squalors of the body, known only to oneself, insignificant in youth, easily dismissed, in old age became dominant and entered into fulfilment of the tyranny they had always threatened. Yet it was, rather than otherwise, an agreeable and interesting tyranny… And all these parts of the body became intensely personal: my back, my tooth, my finger, my toe… Of such small things was her life now made… All tiny things, contemptibly tiny things, ennobled only by their vast background, the background of Death.”

I can highly recommend this book as a delightful read, and an encouraging picture of how to find your freedom and fulfilment near the end of life.